Accumulation and removal of aged or damaged cells found to take place mostly in the liver, rather than the spleen

BOSTON – What happens when red blood cells become damaged or reach the end of their normal life span and how is the iron required for carrying oxygen recycled? A new study led by Massachusetts General Hospital (MGH) investigators contradicts previous thinking about where and how worn-out red blood cells are disposed of and their iron saved for use in new cells. Their findings, being published online in Nature Medicine, may lead to improved treatments for anemia or iron toxicity. 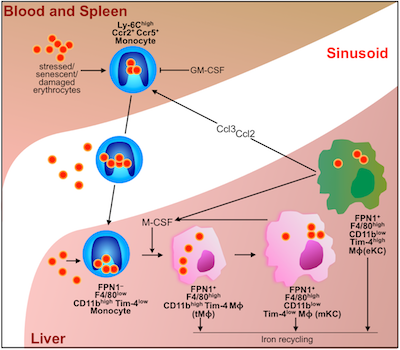 “Textbooks tell us that red blood cells are eliminated in the spleen by specialized macrophages that live in that organ, but our study shows that the liver – not the spleen – is the major site of red blood cell elimination and iron recycling,” says senior author Filip Swirski, PhD, of the MGH Center for Systems Biology. “In addition to identifying the liver as the primary site of these processes, we also identified a transient population of bone-marrow-derived immune cells as the recycling cells.”

The average life span of healthy red blood cells (RBCs) is 120 days, but that can be shortened in pathologic conditions including sepsis and illnesses like sickle cell disease that interfere with normal production of RBCs. The cells also can become damaged during coronary bypass surgery or dialysis, and blood transfusions may contain RBCs that were damaged in the process of collection, storage and administration. Damaged RBCs can release unbound forms of iron-carrying hemoglobin, which can cause kidney injury, and can lead to anemia, reducing the delivery of oxygen to tissues. If disease-associated RBC damage overwhelms the body’s ability to clear aged RBCs, toxic levels of free iron can be released.

In the current study, the research team used several different models of RBC damage, including blood from human bypass patients, to investigate the mechanisms involved in clearance of the cells and the recycling of their iron. Experiments in mice revealed that the presence of damaged RBCs in the bloodstream led to a rapid increase in a specific population of monocytes that took up the damaged cells and traveled to both the liver and the spleen. But several hours later almost all of those RBCs were located within a population of specialized macrophages – cells produced by monocytes that engulf and dispose of debris, damaged cells, and microbes – that were observed only in the liver. Those macrophages eventually disappeared once they were no longer needed. 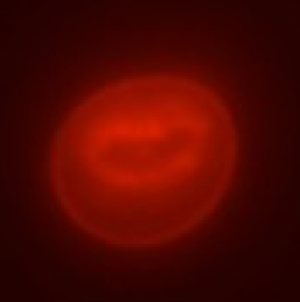 The investigators also showed that expression of chemokines – proteins that direct the movement of other cells – draws RBC-ingesting monocytes to the liver, resulting in the accumulation of the iron-recycling macrophages. Blocking that process led to several indicators of impaired RBC clearance, including toxic levels of free iron and hemoglobin and signs of liver and kidney damage.

“The fact that the liver is the main organ of RBC removal and iron recycling is surprising, as is the fact that the liver relies on a buffer system consisting of bone marrow-derived monocytes that consume damaged red blood cells in the blood and settle in the liver, where they become the transient macrophages capable of iron recycling,” says Swirski, who is an associate professor of Radiology at Harvard Medical School. “The mechanism we identified could be either helpful or damaging, depending on the conditions. If overactive, it could remove too many RBCs, but if it’s sluggish or otherwise impaired, it could lead to iron toxicity. Further study could provide us with details of how this mechanism occurs in the first place and help us understand how to harness or suppress it in various conditions.”