Transport and information exchange are the primary functions of blood. If oxygen transport is disrupted by atherothrombotic occlusion, downstream hypoxic cells and tissues begin dying within minutes, and if left untreated, the organism may succumb to myocardial infarction (MI) or stroke. The cellular blood components, including monocytes and neutrophils, are descendants of hematopoietic stem and progenitor cells and are made in the bone marrow. Innate immune cells defend us against pathogens but may also attack cardiovascular tissues, giving rise to inflamed atherosclerotic plaques, organ ischemia and failing myocardium. In the era of rapid reperfusion and statin therapy, inflammation dominates the residual risk of cardiovascular disease and thus decisively contributes to the pathogenesis of contemporary MI. Because inflammation is currently not targeted by cardiovascular clinical care, this unused opportunity for immunotherapy, which shows great promise in autoimmune and oncological diseases, is likely the next frontier in treating ischemic heart disease. To address this large unmet clinical need, we go to the root of inflammation: leukocyte production, i.e. hematopoiesis. There is a tight interaction of hematopoiesis, white blood count and cardiovascular death. Altered hematopoiesis changes production rates and phenotypes of innate immune cells, which may consequently protect or attack cardiovascular organs. Vice versa, hematopoiesis is influenced by cardiovascular risk factors and disease. For instance, hematopoietic tissues are exquisitely vascularized and therefore intimately connected to blood borne information. Emerging data indicate that hyperlipidemia and acute MI activate the entire hematopoietic tree, including upstream stem cells. However, despite the long-known association between leukocytosis and cardiovascular disease, surprisingly little is known about the marrow in this disease setting. This knowledge gap likely arose from the traditional separation of cardiovascular and hematology disciplines. We assembled a truly interdisciplinary team studying the immune system and hematopoiesis in cardiovascular disease to build the missing link between the involved fields. This unique combination of complementary expertise creates the synergy and critical mass to study the immune system as a driver of cardiovascular mortality. 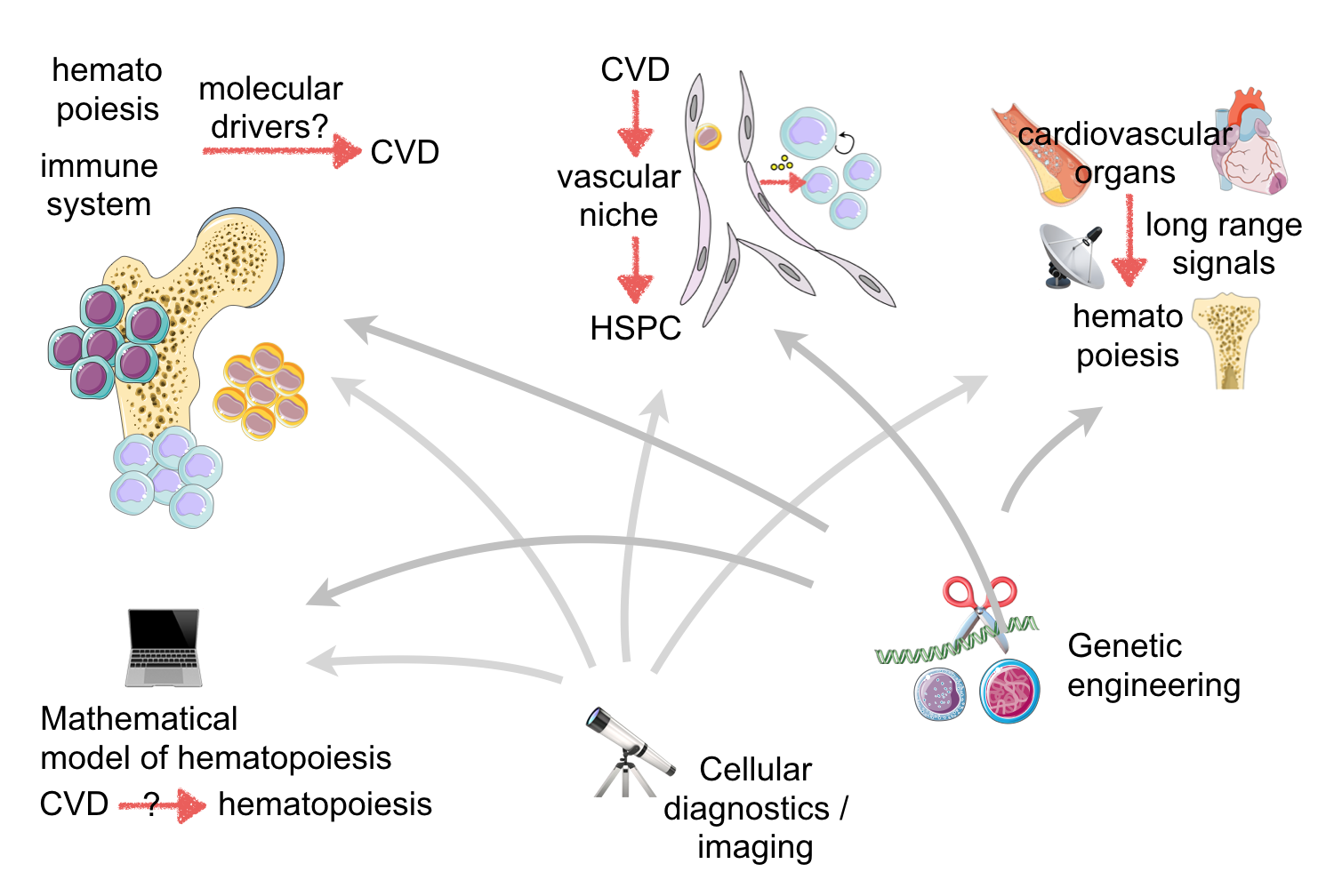 The exercise manuscript by Frodermann and Rohde (Nahrendorf Lab) received the 2020 MGH Martin Prize in Clinical Research. Bottom line: get your recommended 150 min of exercise per week!

Swirski and Nahrendorf labs at the 2019 Atherosclerosis Gordon Conference