An immune cell that protects against cancer

Put simply, cancer is a complex disease. Cancers are often defined by the tissue from which the tumor originates and by markers, such as specific genes, that mutate within cancer cells and drive malignant growth. Although much progress has been made in classifying and understanding tumors and their genetic alterations, it has also become clear that investigating cancer by focusing only on tumor cells does not adequately address the disease’s complexity. 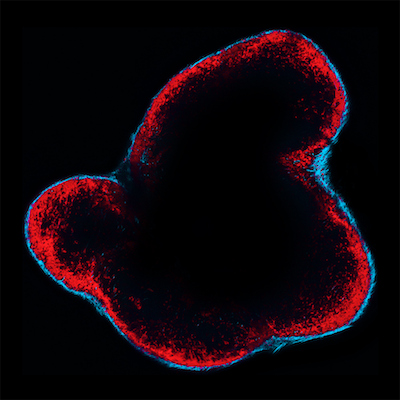 Tumor cells do not exist in isolation: they communicate with seemingly normal non-tumor cells present in tumor masses. These host cells can provide critical support for tumor growth by, for example, recruiting nutrients for the growing cancer or suppressing immune responses directed against the tumor. One host cell type, the macrophage, has received considerable attention because it can promote cancer. Macrophages are innate immune cells that can infiltrate tumors and foster cancer growth locally.

However, macrophages come in different flavors, perform a wide variety of functions and exist in virtually every tissue in the body. Whereas macrophages within tumors generally support those tumors, much less is known about how macrophages located outside the tumor stroma may factor into cancer growth. Mikael Pittet and colleagues, who study how tumors communicate with the immune system, now show that a population of lymph node macrophages, called subcapsular sinus (SCS) macrophages, unexpectedly protect against melanoma. The study was published in Science on March 17, 2016.

Initially, the Pittet team focused on developing a new technology that combines genetic and imaging approaches to track tumor-derived extracellular vesicles (tEVs). tEVs are thought to promote cancer progression: they are small particles shed by tumor cells that can travel long distances in the body and communicate with host cells in remote tissues. Many previous in vitro studies have shown tEVs can modulate targeted cells in a way that facilitates tumor outgrowth, but the behavior of tEVs in vivo remained technically difficult to assess.

The new technology developed by the Pittet team revealed where tEVs traffic in the body, with which cells they interact and how they affect targeted cells and cancer progression. While examining an animal model of melanoma, they found that tEVs drain from the tumor stroma into immune structures known as lymph nodes; once in lymph nodes, tEVs bind SCS macrophages. The findings were confirmed in melanoma patients.

“SCS macrophages line the exterior of lymph nodes in a space called the subcapsular sinus (hence their name),” says Ferdinando Pucci, PhD, of the MGH Center for Systems Biology, first author of the study. “We uncovered that these macrophages form a wall that physically blocks tEV dissemination in the body and therefore prevents the vesicles from interacting with other immune cells to promote cancer outgrowth.” These findings indicate that macrophages do not always promote cancer.

“To our surprise, we found that tEVs reached deeper regions of the lymph node in the absence of SCS macrophages and were able to bind immune cells called B lymphocytes,” says Pittet. B cells can produce antibodies (also called immunoglobulins), which is what they start doing after the SCS macrophage barrier is disrupted and tEVs can go through.

SCS macrophages normally constitute a barrier that prevents infectious agents from spreading to the rest of the body. Now we know that SCS macrophages also play an important role in suppressing tumor outgrowth. Therapeutic strategies that strengthen the SCS macrophage barrier could mitigate tumor co-option of the immune system, providing a new, potentially powerful method to combat the disease.