Discovery of a Neutrophil Type that Promotes Lung Cancer

In the Dec. 1, 2017, issue of Science, Massachusetts General Hospital (MGH) investigators report the identification of a “crosstalk” between lung tumors and bone. This crosstalk generates a previously uncharacterized immune cell subset that travels from bone to tumor and accelerates cancer progression. The findings open up new avenues for cancer immunotherapy. 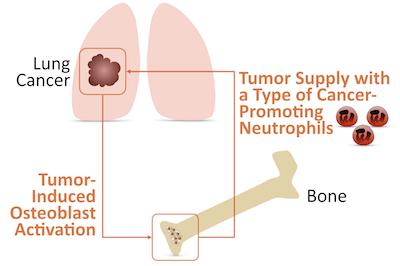 “Immune cells play critical roles in cancer. For example, T cells can eliminate tumor cells and be activated with immunotherapies that are revolutionizing cancer treatment. Besides T cells, tumors are home to diverse immune cell types, some of which remain under-explored and could also be relevant to cancer and its treatment” says Mikael Pittet, PhD , director of the Cancer Immunology Program at the "MGH Center for Systems Biology":https://csb.mgh.harvard.edu/ and senior author of the Science paper.

“We are particularly interested in deciphering myeloid cells, because these cells infiltrate a broad range of tumors and seem to modulate key cancer-associated activities,” adds Pittet. “Myeloid cells include macrophages and neutrophils. Both are emerging as potential targets for cancer therapy. My lab has been studying macrophages for the past 10 years, and we realized more recently that neutrophils also warrant study.”

“We knew from previous research that many myeloid cells found in tumors are originally produced in the bone marrow,” notes Camilla Engblom, PhD, first author of the study. “Myeloid cell production is controlled in part by so-called bone marrow stromal cells. Because of this, initially we wondered whether some tumors modify these stromal cells and perhaps do so in a way that increases the production of myeloid cells that promote cancer.”

The team addressed this question by exploring a common solid cancer: lung adenocarcinoma. “We found in several mouse models and in cancer patients that lung adenocarcinomas increased bone activity even in the absence of bone metastasis,” says Christina Pfirschke, PhD, co-first author of the Science paper. “We further discovered that the bone activity was mainly mediated by bone marrow stromal cells called osteoblasts.” Having found that lung tumors could affect bones, the team next wondered whether the bone activity was relevant to lung tumor progression.

“To test this hypothesis, we developed experimental models that allowed us to manipulate osteoblasts in mice,” notes Engblom. “Remarkably, we found that reducing the number of osteoblasts in the bone could interrupt tumor progression in the lung”. In other words, the communication between lungs and bones goes both ways: lungs affect bones, and, in turn, bones affect lungs.

“One missing piece was how osteoblasts could promote lung tumor growth remotely,” adds Pfirschke. “We reasoned that osteoblasts might regulate bone production of immune cells, which then accumulate in tumors. So we compared the tumor immune infiltrates from animals with either normal or reduced numbers of osteoblasts. We found that most immune cell types accumulated in similar amounts in both groups of mice. But one exception was tumor neutrophils, which were much less abundant in mice from which osteoblasts had been removed”.

These and other experiments indicated that osteoblasts supply lung tumors with neutrophils. These cells are typically useful to the host. For example, neutrophils play key roles in the defense against invading pathogens and in tissue healing following injuries. Yet emerging evidence indicates that neutrophils can also be involved in tumor progression.

The team also searched for factors that could carry an activating signal from lung tumors to osteoblasts, thereby inducing the production of SiglecF high neutrophils. This search identified a molecule called sRAGE. This soluble factor was found at higher levels in the blood of animals with lung tumors, could increase the activation of osteoblasts and contributed to the maturation of neutrophils in cultured cells.

“Our findings indicate the existence of long-distance and back-and-forth interactions between lung tumors and bones: lung tumors remotely activate osteoblasts, and those bone cells, in turn, shape immunity by supplying tumors with cancer-promoting neutrophils,” says Pittet, who is an Associate Professor of Radiology at Harvard Medical School. “Since patients with many types of cancer have elevated levels of myeloid cells in their blood, it’s possible that other tumors could have similar interactions with bone to increase myeloid cell production.”

Pittet adds that this study “shows the importance of investigating cancer as a systemic disease. Analyzing how organs far from tumors contribute to cancer progression should lead us to ways of manipulating those systemic activities in therapy. We have started to study the complexity of myeloid responses to cancer and to identify molecular and cellular components that promote the disease. With the ultimate goal of improving patients’ quality of life, we are hopeful that modulating myeloid pathways will overcome some of the limitations of current treatment options.”