In today’s fast paced world, waiting for anything is often frustrating and stressful. But few delays can be worse than the wait following a diagnostic blood test or biopsy, where results can take days to come back. Recently, a new device developed by Massachusetts General Hospital (MGH) scientists at the Center for Systems Biology has been shown capable of on the spot cancer diagnosis.

The portable device, known as DMR diagnostic magnetic resonance can detect cellular markers for cancer from minute amounts of patient tissue in less than an hour. Not only that, but the data generated is more accurate than that of standard diagnostic procedures. The findings of a human clinical study comparing the DMR to standard pathological tests are published in the February issue of Science Translational Medicine. 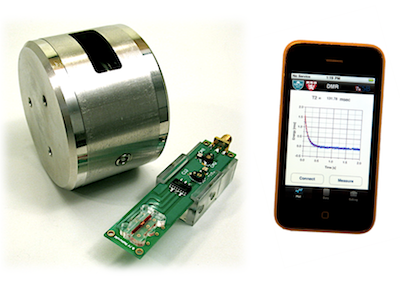 The Challenge of Cancer Diagnosis

A long held dream in medicine has been the capability for quick and accurate cancer diagnosis. Cancer being the complex disease that it is, however, achieving this goal has been far from trivial.

One problem with current diagnostic techniques is the large amounts of tissue required from patients (especially for protein analyses) and the inconsistency of specimens. When you deal with real patients, samples are very variable, explains Cesar Castro, a physician at MGH and joint first author of the paper. Tumors are not clean you get inflammatory cells and other non-tumorous cells intertwined. And you get different numbers of cells in each sample. Hence the need for more tissue.

While it may be fine to remove tumor mass from a patient undergoing surgery, however, minimally invasive approaches that spare patients undue pain and suffering are obviously preferable.

The development and adoption of novel diagnostic technologies, promising faster and more accurate cancer detection, has not proved any easier. Often these devices require particular skills to operate or extra processing steps, and even the data generated can be subject to interpretation or may require costly specialized machinery.

The challenge, therefore, has been to create a portable, fast and accurate diagnostic device, one that is not only user friendly, but is also capable of quantifiably detecting cancer from small amounts of patient tissue.

It appears not. In a recent clinical trial at MGH, a DMR device created by Ralph Weissleder’s laboratory at the Center for Systems Biology was tested in a total of 70 patients with suspected abdominal malignancy. All patients in the study underwent a biopsy in addition to a minimally invasive procedure known as fine needle aspiration essentially a mini biopsy that collects cells rather than tissue. Specimens acquired via biopsy were then sent to the lab for standard diagnostic testing, whereas the aspirates were run through the DMR system. 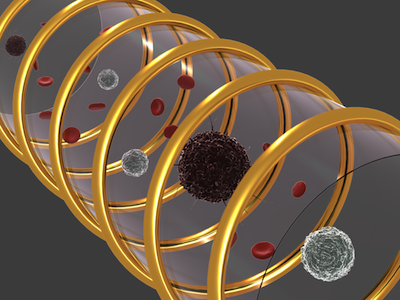 About the size of a coffee mug, the DMR is the world’s smallest cancer diagnostic system. It is based on the same magnetic principals as MRI and is essentially composed of two parts: one that holds antibodies targeted for specific cellular markers of cancer, and one that holds tiny signal-generating magnetic particles. When a patient sample is run through the device, these two systems mix together and via new innovative chemistry, the magnetic particles bind to the antibodies. Consequently, when the antibodies seek out and latch onto their target within the sample, the attached magnetic particles act essentially as flags, signaling the presence of a particular cancer marker. These signals are subsequently detected and quantified by the DMR.

The tricky part is detecting the signals, particularly if the amounts of cancer marker are extremely low. But it appears the researchers have got around that. Using our novel labeling chemistry, explains Hakho Lee, assistant professor at MGH, who spearheaded development of the system, we could load more particles onto our antibodies to generate more signal. So even at low levels of marker-particle interaction, you can still detect a signal.

According to Lee, the original DMR prototype was only capable of detecting one or two cancer markers. But they soon came to realize that it’s not the case that one cancer marker fits all.

It’s more of a panel, Castro explains. Since there are often random differences, even within the general population, you can’t just rely on one cancer marker. Instead, we looked for a pattern of cancer marker expression.

Through a process of trial and error involving a panel of 12 cancer markers, the researchers eventually discovered that analysis of a specific four-marker combination could detect cancerous cells in patient samples with an accuracy of 96 percent; a result which was then validated in a separate group of patients. Better yet, this information could be generated in under an hour compared to the several day turnaround time for routine pathology.

If that wasn’t convenient enough, the DMR can also interface with a smartphone or tablet. Test results can be obtained on the spot and transferred to the doctor directly, says Lee.

This rapid turnaround time for DMR results is not only a benefit to patients in terms of alleviating anxiety, but also serves to ensure minimal loss of specimen.

According to Castro, standard cytology can take 3 to 4 days because biopsy specimens are left to accumulate until they can be processed in batches. But delay in obtaining results is not the only problem. We found that if you left the specimens over time, you see marked degradation in the protein markers, explains Castro. So either you have to do some sort of fixing to make sure that they are stabilized or run the sample as soon as possible.

So it would seem, when compared to standard cancer diagnostics, the DMR wins on all accounts, not only in terms of accuracy and safety, but also because its speed ensures maximum specimen integrity.

According to the researchers, the implications for patients are manifold. As our knowledge advances and we become aware of more relevant markers, we could use different antibodies to improve diagnostics or detect [drug] resistance, says Lee. We could then tailor the platform to specific subsets of cancer.

Even beyond cancer, tuberculosis is another area of active research in the lab. And since the turnaround time for TB diagnosis is not 3 to 4 days but weeks or months, there is an urgent need for faster techniques. By changing the antibodies you can detect many different things besides cancer cells, explains Lee.

As for the device itself, We are always striving to improve the chemistries; we are not going to end at this DMR version, says Castro. We are already working on the next generation.

Science Podcast – Conversation with Ralph Weissleder, who talks about his miniature micro-NMR machine operated by smart phone technology that can detect cancer cells in tissue biopsies from patients in less than an hour. (6 minutes, 23 February 2011) (mp3)