For decades, doctors knew that chronic stress is bad for you. Atherosclerosis has been nicknamed a “manager’s disease” for this reason. Previously, we thought this is because of heightened blood pressure, and its direct actions on the blood vessel wall. The study by Heidt and Sager found that psychosocial stress activates bone marrow stem cells, which in turn triggers overproduction of inflammatory leukocytes, including neutrophils and monocytes. These leukocytes are more numerous in blood and accumulate in atherosclerotic lesions, putting the individual at higher risk for myocardial infarction and stroke. 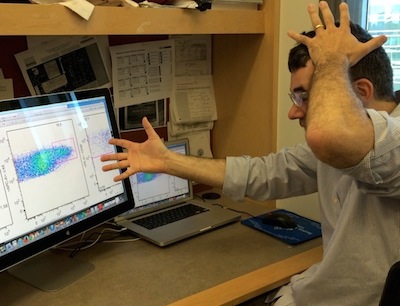 Hematopoietic stem cells are very rare (only 1 in 10,000 cells in the marrow), and 95% are silent, or “hibernating” in healthy individuals until they are needed. The other 5% are cycling and produce our blood cells, billions of them every day. In case of infection or injury, more stem cells are “woken up” and produce additional cells to defend the body. In diseases that involve chronic inflammation such as atherosclerosis, more stem cells are active, overproducing inflammatory macrophages that migrate to the arterial wall. Once in plaque, macrophages accelerate plaque growth and increase the likelihood of myocardial infarction.

Heidt and Sager describe in their manuscript that stress activates the sympathetic nerve, which is a part of the autonomous nervous system. This is useful in dangerous situations, to ready the organism for fight and flight. Possibly, increased production of leukocytes prepares the stressed human for a potential injury, to better heal any resulting wounds. Chronic stress leads to chronic firing of the sympathetic nerve, which changes the microenvironment in the bone marrow. To put it simply, the nervous signals remove the “brake” from stem cells, or awaken them to produce more leukocytes. A key factor is CXCL12, which is produced by bone marrow niche cells connected via a synapse-like connection to sympathetic nerve fibers.

In doctors working stressful shifts on ICU, the levels of inflammatory blood leukocytes were increased, specifically the number of neutrophils and monocytes. This was quite similar to the findings in stressed mice. Interestingly, myocardial infarction is more frequent in “stressful times” such as Christmas, and during the soccer world cup. Also, our veterans returning from wars have 2-fold increased risk of atherosclerosis. Maybe these observations are related to the mechanisms discovered by the Nahrendorf lab.