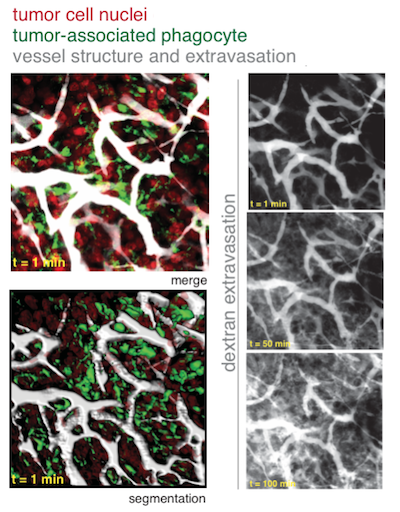 In vivo microscopy allows tumor cells (red), tumor-associated macrophages (green), and vascular structure (white) to be quantitatively examined over time, in response to radiation therapy. Data are shown as a projection of the microscopy images (top left) and as a computational reconstruction of those images (bottom left). Fluorescently-labeled dextran leaks from tumor vessels (top right) into neighboring tumor tissue (bottom right), thus allowing heterogeneous permeability of tumor vessels to be quantified. Vessels are especially leaky in regions near tumor-associated-macrophages.

BOSTON – A Massachusetts General Hospital (MGH) research team has identified a surprising new role for the immune cells called macrophages – improving the effectiveness of nanoparticle-delivered cancer therapies. In their Science Translational Medicine report, the investigators describe finding how appropriately timed radiation therapy can improve the delivery of cancer nanomedicines as much as 600 percent by attracting macrophages to tumor blood vessels, which results in a transient “burst” of leakage from capillaries into the tumor.

“The field of nanomedicine has worked to improve selective drug delivery to tumors for over a decade, typically by engineering ever more advanced nanomaterials and often with mixed clinical success,” says lead author Miles Miller, PhD, of the MGH Center for Systems Biology. “Rather than focusing on the nanoparticles themselves, we used in vivo microscopy to discover how to rewire the structure of the tumor itself to more efficiently accumulate a variety of nanomedicines already in clinical use.”

Encapsulating cancer drugs in nanoparticles can improve pharmacokinetics – how a drug is absorbed, distributed, metabolized and excreted – by extending a drug’s presence in the circulation and avoiding the toxic solvents used in infusion chemotherapy. But in clinical practice, delivering nanoencapsulated drugs into patients’ tumors has been challenging, largely because of known factors in the microenvironment of the tumor. High pressures within tumors and low permeability of tumor blood vessels limit the passage of any drugs from the circulation into tumor cells.

A 2015 study by Miller and his colleagues showed that tumor-associated macrophages can improve delivery of nanoparticle-based therapies to tumor cells, and radiation therapy is known to increase the permeability of tumor vessels. But exactly how these effects are produced and how they could be combined to enhance nanomedicine delivery was not known. Answering those questions was the goal of the current study. 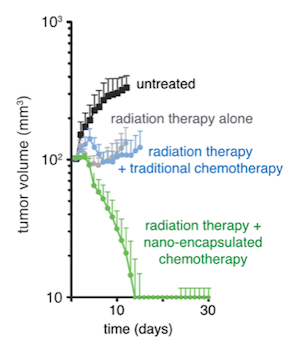 Combined radiation therapy and nanoparticle-delivered chemotherapy leads to synergistic tumor eradication in mice. The tumors of fibrosarcoma-bearing animals were locally irradiated and then treated with either a traditional, solvent-based infusion of the chemotherapeutic irinotecan (blue), or a liposomal nanoformulation of the same drug (green). Only the nanoparticle-based therapy synergistically combined with radiation therapy to dramatically shrink the tumors.

Experiments in mouse models of cancer revealed that radiation therapy produced important changes in the tumor microenvironment – including greater blood vessel size and permeability and an increase in the number of macrophages relative to tumor cells. These changes did not appear until 3 to 4 days after administration of radiation therapy and disappeared by day 11. Analysis of patient biopsy samples taken before and several days after radiation therapy for breast or cervical cancer revealed significant macrophage expansion in post-radiation samples, with the greatest increases in patients receiving the highest radiation dosage.

Additional mouse studies showed that, beginning three days after radiation therapy, the uptake of nanoparticles but not of solvent-delivered drugs approximately doubled. High-resolution in vivo microscopy revealed that increases in vascular permeability occurred erratically, with periods of low permeability interrupted by a bursting of vascular contents, including nanoparticles, into the tumors. The rate of bursting increased three days after radiation and was higher on larger blood vessels with adjacent macrophages. Removal of macrophages prevented the radiation-induced changes and the increased uptake of nanoparticles. Combining radiation therapy with cyclophosphamide – a DNA-damaging drug that enhances nanoparticle delivery to tumor cells through similar tumor-priming mechanisms – led to even greater nanoparticle uptake. 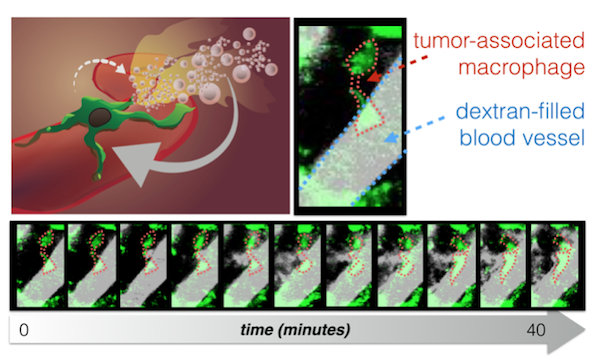 In this illustration (top left) based on in vivo microscopy, a tumor-associated macrophage (green) induces a burst of leakage from a tumor blood vessel (red), which releases nanoparticles into the tumor tissue (yellow). The large arrow shows nanoparticles being taken up by the macrophage, while the small dashed arrow depicts how the macrophage elicits further nanoparticle delivery via vascular bursting. In vivo microscopy images (enlarged at top right, corresponding time-course at bottom) show a macrophage straddling a tumor vessel, which transiently releases dextran into the tumor tissue over the course of 20-40 minutes as the macrophage migrates around the burst site.

Testing the therapeutic effect of combining radiation therapy with a nanoparticle-encased chemotherapy drug in a mouse model confirmed the efficacy of the strategy and the key role of macrophages. While combining radiation with a solvent-based drug had no benefit compared with radiation alone, delivery of a nanoencapsulated version of the same drug three days after radiation therapy eliminated most tumors, an effect that was significantly reduced if macrophages were depleted.

“Finding that this combination of radiation and nanomedicine leads to synergistic tumor eradication in mice provides motivation for clinical trials that combine tumor rewiring using radiation therapy with nanomedicine,” says Miller, who is a core member of the MGH Center for Systems Biology. “Most of the treatments and nanomedicines employed in this study are FDA approved for cancer treatment, so this combination treatment strategy could be tested in clinical trials relatively quickly. And given the role of macrophages in this approach, we are particularly interested in combining tumor irradiation and nanomedicine with immuno-oncology therapies.”

In the Science Translational Medicine paper, the authors found apparent differences in macrophage behavior that depended not just on macrophage presence or absence, but on their local spatial distribution within the tumor. In particular, the phagocytes (innate immune cells including macrophages) that closely associated with tumor microvasculature correlated strongly with the effects of radiation therapy on nanotherapeutic delivery, including through the production of vessel bursts of extravasation into tumor tissue. For instance, this is highlighted in Figure 1 of the manuscript, where these “perivascular phagocytes”, but not total phagocytes (which include phagocytes away from the vasculature) are statistically associated with radiation therapy. One intriguing piece of evidence (which has generated queries from outside readers) for the importance of perivascular phagocytes was found when irradiated tumors were treated with clodronate liposomes (clod-lip) to systemically deplete phagocytes. In the main text, the authors describe: "As expected, clod-lip treatment reduced the amount of perivascular phagocytes.” Owing to space limitations of the manuscript, it was not further discussed that clod-lip did not cause a wholesale reduction in all phagocytes (described as “phagocyte count” in the supplement, which includes cells away from vessels), but rather a reduction in perivascular phagocytes and an apparent corresponding shift in the phenotype with respect to spatial distribution. The data for both perivascular phagocytes and phagocyte count was nonetheless included in the manuscript’s supplement (fig. S8a), because it may be important in future more detailed examinations of phagocyte subsets, which may include macrophage subtypes or other innate immune cells such as neutrophils. These results open new questions about what underlying molecular and cellular differences exist between perivascular phagocytes and other innate cell populations in the tumor.