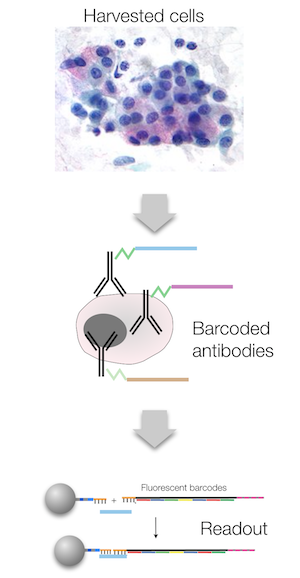 A new technology developed at the MGH Center for Systems Biology (CSB) allows simultaneous analysis of hundreds of cancer-related protein markers from minute, minimally invasive patient samples. This new technology, which uses antibodies linked to unique DNA barcodes to detect a wide range of target proteins, is both highly robust and exquisitely sensitive. It could thus serve as an invaluable tool for helping clinicians gain valuable insights into the biology of cancer progression as well as determine why certain cancer therapies stop working or are ineffective to begin with. The technology is reported in the January 15, 2014 issue of Science Translational Medicine. 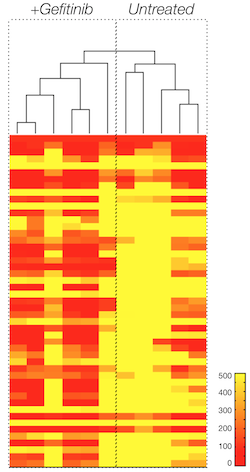 Minimally invasive techniques such as fine needle aspiration are increasingly employed to obtain serial measures of drug response during clinical trials as they are simple and cheap to perform. However, they yield such small quantities of cells that the information that can be obtained from them is very limited. “What this study sought to achieve was to work around these limitations,” explains Cesar Castro, MD, an Instructor of Medicine at Harvard Medical School and an author on the paper. “Instead of trying to procure more tissue and expand testing, what we wanted to do is extract more information from a limited quantity of specimen to meet emerging clinical trial needs.”

Up until now, pathologists have only been able to examine a single marker or a handful of markers at a time for disease diagnosis. But now, by leveraging a new technology, researchers at the CSB have demonstrated that they can look at hundreds of markers simultaneously down to the single cell level. “We are thus increasingly not limited by the scant cell quantities procured through minimally invasive procedures,” says Castro. “Rather, the bottleneck will be our understanding of the various pathways involved in disease progression and drug target modulation.”

The novel method centers on an approach known as ‘DNA-barcoded antibody sensing’, wherein cancer-related antibodies are decorated with unique DNA barcodes, or identifiers. The antibodies and DNA identifiers are connected to one another by “photocleavable” linkers, which break apart when exposed to light. Thus, after mixing with a sample, the antibodies first seek out and bind their cancer-targets, and the unique DNA barcodes are then released following a light pulse. The DNA barcodes are subsequently mixed and tagged with fluorescently-labeled complementary barcodes, which can be detected and quantified via imaging.

After initially demonstrating and validating the technique’s feasibility in cell lines and single cells, the team went on to test it on actual patient specimens. “We showed that this technology works well beyond the highly regulated laboratory environment, extending into early phase clinical trials,” says Castro.

Ultimately, the implications for this type of technology are vast. “It is within the realm of possibility,” says Castro, “that in this era of personalized medicine, we could leverage such technology to not only monitor, but actually predict, treatment response. Namely, by obtaining samples from patients before starting any therapy and then exposing them to different chemotherapeutics or targeted therapies. In this way, we could select the most appropriate therapy for individual patients.”