“Although anti-PD-1 checkpoint immunotherapy has proven incredibly useful against some cancers, we still know relatively few specifics on how the treatment works,” says Mikael Pittet, PhD, of the MGH Center for Systems Biology, senior author of the Immunity paper. “Here we show that a more complex interaction between cytotoxic T cells and intratumor dendritic cells is needed to release the brakes on T cell immunity that normally prevent the immune system from responding to cancers.”

The PD-1 molecule is expressed on CD8+ T cells to prevent them from attacking “self” tissues but also shields tumors from the immune response. Monoclonal antibodies that block the PD-1 pathway have been effective in activating CD8+ T cells against several types of cancer, but many factors can limit the effectiveness of the treatment. Pittet and his team hypothesized that the cytokine interleukin 12 (IL-12), known to be important in immune control of cancer, might contribute to anti-PD-1 therapy. But since T cells do not typically produce much IL-12, the investigators took a broader look at the effects of anti-PD-1 therapy on the immune microenvironment within a tumor.

“We used intravital imaging to interrogate in live mice how immune cells within tumors respond functionally to anti-PD-1 immunotherapy” says Christopher Garris, PhD and first author of the study. “Using this approach, we found that anti-PD-1 drugs induced CD8+ T cells to produce interferon-gamma (IFN-γ), which is one of the most important cytokines for an anti-cancer immune response. What was less expected is that neighboring dendritic cells also started to produce copious amounts of IL-12 in response to anti-PD-1 treatment.” The video shows how the researchers were able to detect IL-12-producing dendritic cells (in yellow) within the tumors of live mice (tumor cells are in red and tumor-associated macrophages and tumor vessels are in blue). The researchers further found that IFN-γ produced by the T cells induces dendritic cells to produce IL-12, and that IL-12 acts as a potent and necessary activating signal that enables CD8+ T cells to attack the tumor. 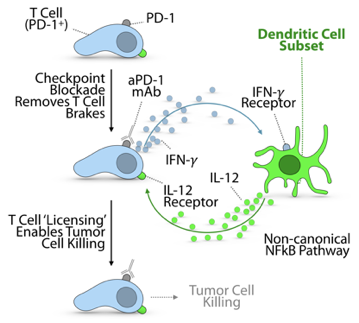 Further characterization of the tumor immune microenvironment using single cell sequencing technologies revealed that IL-12-producing dendritic cells had turned on the non-canonical NFkB signaling pathway. This pathway has been implicated in the activation of CD8+ T cells by dendritic cells in contexts other than cancer, suggesting that non-canonical NFkB activation can be an important functional feature of dendritic cells. Indeed, the authors found that inhibiting this pathway diminished anti-PD-1 therapeutic efficacy; conversely, combining anti-PD-1 treatment with activators of the non-canonical NFkB pathway produced dramatic anti-tumor responses in mouse models of cancer, including a melanoma model that usually resists anti-PD-1. Not only did the combined treatment control tumor growth in these models more completely than treatment with a single drug, it also prevented tumors from being re-established, suggesting that the therapy generated persistent anti-cancer immune memory.

“Activation of the non-canonical NFkB pathway increased both the number of dendritic cells and their production of IL-12, further increasing the antitumor activity of CD8+ T cells,” says Pittet, who is an associate professor of Radiology at Harvard Medical School. “Anti-PD-1 drugs are well known to release the brakes on T cells; in addition, our study indicates that agents promoting intratumoral IL-12 production can apply gas to fuel the anti-tumor reaction. Now we need to learn more about dendritic cells in cancer and whether drugs that properly activate these cells will offer clinical benefits against a broader range of tumors, aiding more cancer patients.”

The co-lead authors of the Immunity paper are Christopher Garris, PhD, and Sean Arlauckas, PhD, of the MGH Center for Systems Biology. Support for the study includes National Cancer Institute grants R01-AI084880, R01-CA218579, R01-AI123349 and R01-CA206890, the Samana Cay MGH Research Scholar Fund, and the Robert Wenner Award from the Swiss Cancer League.